Fast on the heals of President Obama’s relations-thawing trip to Russia came this startling statement from the Vice President:

The reality is the Russians are where they are.Â  They have a shrinking population base, they have a withering economy, they have a banking sector and structure that is not likely to be able to withstand the next 15 years, theyâ€™re in a situation where the world is changing before them and theyâ€™re clinging to something in the past that is not sustainable.

Now don’t get me wrong:Â  the Russians continue to be dangerous.Â  Russia is one of the few countries in the world where officials will lie to your face, telling you stories that are demonstrably false.Â  As the Economist pointed out a few months ago, the US looms much larger in the Russian mind than vice versa.Â  As such, the Russians often play a zero sum game where it seems that in order for them to feel like they’ve won, you have to loose.

All that being said, President Obama has just expended considerable political capital on thawing relations with the Russians and trying to bring them on board with several initials that are in our national interest.Â  For the Vice President to sharply undercut this hard works so quickly seems… at the very least a little strange.Â  But then the Vice President is notorious for making, shall we say, “inopportune” remarks.

Not every truth needs to be aired publicly, especially when you’re an elected official.

I’ve been following with great interest the recent goings-on in Iran because I see it as one of the most hopeful major events in recent memory.Â  Here we have a country whose government is the number one state sponsor of terror, whose president denies the Holocaust while vaguely threatening to unleash one on Israel, and the people of this country have finally indicated that they’ve had enough and are ready to toss the government on onto the street.

The cable networks were extremely slow to pick up this story — I guess the fall of the regime that is the No1 state sponsor of terror was simply less important than who broke up with who in Hollywood.Â  In any case, the best reporting on this — that I can find — is being done by Andrew Sullivan.Â  Most of the time I strongly disagree with his politics, but here he is doing a great job of aggregating information from all over to give you a picture of what’s going on.

Recently the New York Times ran a headline that said Iran Leader’s Warning Puts More Pressure on Obama (hopefully they’ve changed the headline by the time you click through).Â  Now folks, my response to this is WTF.Â  What can the president of the United States, a country known within Iran as The Great Satan, possibly say to make this situation better?Â  Are we going to send in troops?Â  No.Â  Would Obama throwing his support behind the opposition leader destroy Mousavi and allow Khamenei and Amadinajab to paint him as an American stooge? Yes.

Image if, after Bush v. Gore, protestors has taken to the streets.Â  Now imagine you read a French newspaper whose lead headline reads “Protests Put Pressure on Chirac to Intervene.”Â  Wouldn’t you be thinking WTF how is this any of their business? Of course you would.Â  And if we interject ourselves into the Iranian debate, the folks in Iran will be thinking the exact same thing.

The journalists who are bringing to the world, at risk to their own life, details of the events occuring are doing great work.Â  They should keep up their efforts.Â  For the government of the United States to interject itself, however, is entirely inappropriate.Â  When it comes to someone else’s election, we are simpy not center of the world.

United States Navy personnel rescued the captain of an American cargo ship on Sunday by killing three Somali pirates who had been holding him hostage for four days, government officials said.

Just after dark on Sunday, snipers on the U.S.S. Bainbridge saw that one of the pirates was pointing an automatic rifle at Captain Phillips, and that the captorsâ€™ heads and shoulders were exposed from the capsule-like lifeboat. President Obama had previously authorized the use of force if the commander on the scene believed the captainâ€™s life was in danger, so they fired, Admiral Gortney said.

It’s all pretty murky what happened, but I wouldn’t be surprised if the on-scene commander chose to interpret if “the captain’s life was in danger” as “if you have a really good shot.”

It’ll be interesting to see what happens to the captured pirate — the whole legal side of this piracy thing has been making everyone’s head hurt.Â  Hopefully this case sets some meaningful precedent on how we deal with pirates in the future.

Someone please explain to these people that the purpose of marching is simply to get from point A to point B: 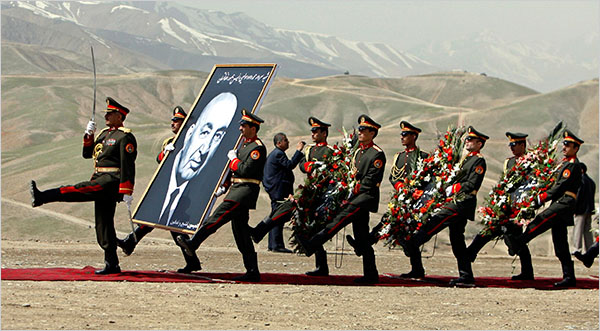 Following an earlier report, comes this follow up via the New York Times:

A senior Vatican cleric on Saturday defended the excommunication of the mother and doctors of a 9-year-old girl who had an abortion in Brazil after being raped. The child was pregnant with twins.

Hugo Chavez has been busily destroying his country’s economy and infrastructure like Godzilla rampaging through Tokyo.Â  The voters of Venezuela recently thanked him by removing presidential term limits, opening the gates for him to run for a third term and remain president indefinitely.Â  Chavez’s policies have graced the country with an inflation rate of 36 percent, and the country’s oil and gas production has fallen since Chavez nationalized the entire industry:

PdVSA’s [the state oil monopoly] debt has gone from two billion dollars ten years ago to $20 billion, its production has fallen from 3.2 to 2.4 million barrels a day, and the refineries are running into operational problems

Which raises a question for the people of Venezuela:Â  Are you living in abject poverty because you deserve it?Â  Of course, that’s a horrible thing to say and I don’t believe it at all, but when the citizens of a country vote in a manner so contrary to their own financial well being it’s easy to throw up your hands in despair.

Mexico recently arrested 10 members of a hit squad that had come to the capital, Mexico City, to make war on another gang.Â  As the Wall Street Journal details:

Since coming to power three years ago, Mexican President Felipe Calderon has dispatched thousands of Mexican soldiers to try to take back large swaths of territory controlled by the traffickers. But the sharp increase in violence has led some analysts to question whether Mexico is capable of defeating the traffickers.

The violence truly has been horrific, as not only the body count rises but also the brutality of the killings â€“ it’s now almost common practice to torture victims before executing them.Â  Two episodes from American history come to mind as parallels:Â  Chicago during Prohibition and New York and the mob during some of the later decades of the previous century.

The situation in Chicago solved itself when the revenue generating substance in question was legalized; what little progress was made before then came courtesy federal involvement.Â  The New York mafias were relegated to obscurity only after immense amounts of pressure from the FBI, involving years of slowly tightening the screws on the mob.

Unfortunately neither of these situations brings much hope for Mexico.Â  First, itâ€™s unlikely cocaine will be legalized in the United States anytime soon.Â  Second, in both New York and Chicago it took the presence of pooled resources from outside entities to eliminate the criminal element.Â  Neither NYPD nor Chicago PD were able to take on the criminal gangs â€“ it took the FBI, representing the combined power of the entire country, to bring the situation under control.Â  In Mexico the entire country is under siege, so there is no greater force coming to the rescue.

Finally, itâ€™s important to note that while the profits reaped by the mafia and the Chicago gangsters were generous, when compared to the standard of living of the populace they were not as extreme as what the gangs in Mexico currently reap.

Whatâ€™s the solution?Â  Iâ€™m not sure.