I recently stumbled across an article, albeit a bit old, that highlights four things that make a company a great place to work. I’m posting it here because it pulls together and provides structure to a lot of thoughts I’ve had on the subject.Â  The four attributes are:

There’s two observations I’d add.Â  First, different attributes are going to be more important to different people.Â  The idea of working with people you like and respect – especially fun, engaging people – is incredibly important to a friend of mine.Â  It’s important to me as well, but speaking with her helped me realize that things like a strong positive culture firmly grounded in a meaningful purpose and work that forces me to stretch my brain and skills are more important – and that I tend to think that the former follows the latter two.

Second, the idea of fulfillment (rather than simply obtaining sustenance) through work is a relatively new phenomenon, at least in it’s breadth of applicability.Â  When the majority of the population was engaged in subsistence farming, or even in repetitive assembly line tasks in the union heyday of yore, I don’t think people used the four criteria above in determining what was a great place to work.Â  Instead a great place to work was probably “somewhere that lets me feed my family on a fairly consistent basis.”Â  It’s worth pausing to think how incredibly lucky we are to live in a time where we can afford to consider things like “a strong positive culture, firmly grounded in a meaningful purpose” in selectingÂ a place of work.

Trying to figure out what the deal is with all of the competing 4G standards and claims from different cell phone companies?Â  CNet has an excellent article that explains it all.

Given this statement regarding a collection of housing units in NYC:

All are owned by private or nonprofit groups overseeing buildings that were already deeply distressed and populated by the poorest of residents, giving owners razor-thin margins to operate on. People bought co-op apartments for as little as $250, according to the city, while renters pay as little as $90 a month.

…tell me if this surprises you:

the residents of 1694 Davidson Avenue in the Morris Heights section of the Bronx, a formerly city-owned 42-unit buildingÂ … say living conditions have gone from to bad to worse.The front door locks have long been broken. The garbage incinerator stopped working for months, leading to a stomach-churning stink and attracting raccoon-size rats.

Five years ago the elevator ground to a halt, forcing children of one tenant, Nina Mitchell, to take turns last year hoisting their mother, hobbled by a torn Achilles tendon, up and down four flights of stairs, in her wheelchair, until she healed.

Step one, break the market and impose artifically low caps on rental rates.Â  Step two, bemoan the poor condition of the city’s rental stock.Â  Anyone feel like these two are somehow related?

It’s been well known for some time that U. S. farm policy consists of large farming corporations handing policians campaign donations, and politicians handing these companies large quantities of taxpayer cash in return.Â  In an editorial today, the Wall Street Journal discusses just how rediculous this policy has become, and the lengths our politicians will go to in their efforts to protect this waste of taxpayer money.

U.S. cotton farmers took in almost $2.3 billion dollars in government subsidies in 2009, and the top 10% of the recipients got 70% of the cash. Now Uncle Sam is getting ready to ask taxpayers to foot the bill for another $147.3 million a year for a new round of cotton payments, this time to Brazilian growers.

Here’s the problem: The World Trade Organization has ruled that subsidies to American cotton growers under the 2008 farm bill are a violation of U.S. trading commitments. The U.S. lost its final appeal in the case in August 2009 and the WTO gave Brazil the right to retaliate.

Brazil responded by drafting a retaliation list threatening tariffs on more than 100 U.S. exports, including autos, pharmaceuticals, medical equipment, electronics, textiles, wheat, fruits, nuts and cotton. The exports are valued at about $1 billion a year, and the tariffs would go as high as 100%. Brazil is also considering sanctions against U.S. intellectual property, including compulsory licensing in pharmaceuticals, music and software.

The Obama Administration appreciates the damage this retaliation would cause, so in April it sent Deputy U.S. Trade Representative Miriam Sapiro to negotiate. She came back with a promise from Brazil to postpone the sanctions for 60 days while it considers a U.S. offer toâ€”get thisâ€”let American taxpayers subsidize Brazilian cotton growers.

I’m really not sure what to say.

From the Calculated Risk blog comes this chart: 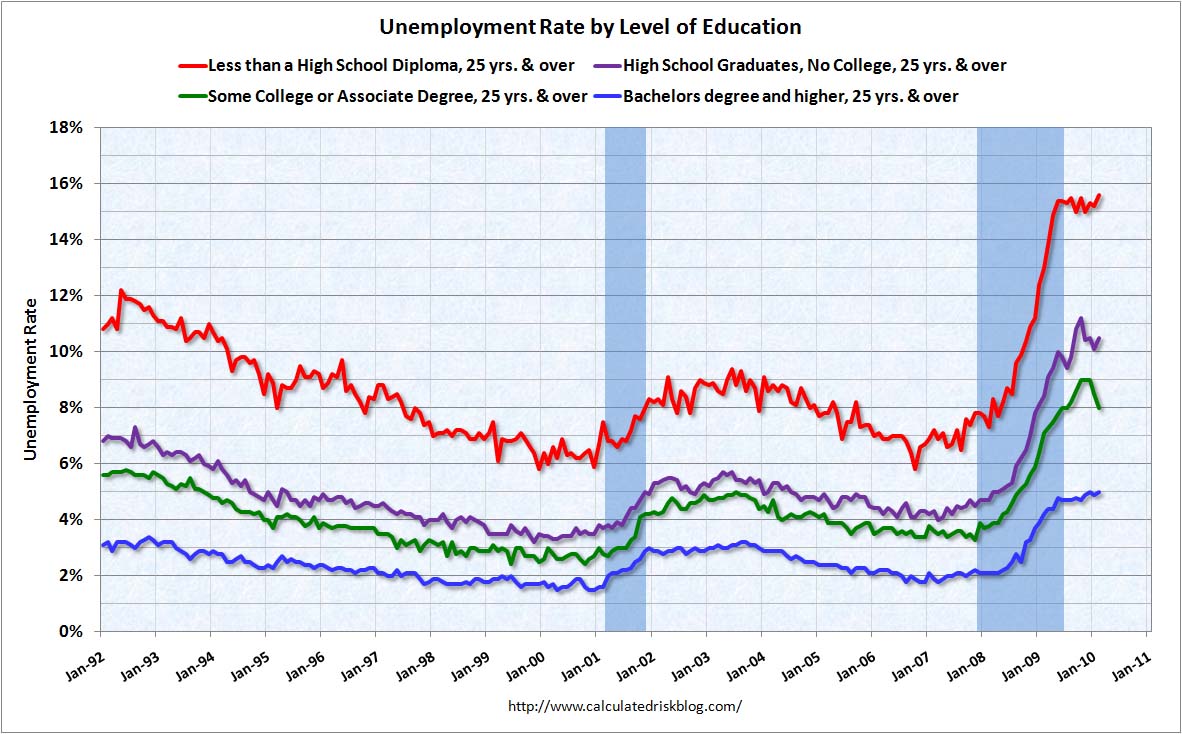 Ever since I gave them my email address so that I could receive “important” account alerts and electronic statements, Citi Cards has been sending me a worthless Card Benefits newsletter.Â  Today I mailed them this letter.Â  It took a lot longer than pressing delete, but it was strangely satisfying.

The law says I can walk away from my house, even if I can afford to make payments.Â  Is is ethical to do so?Â  I say no:

So no, I don’t see jerks who speculate on houses and then walk away from their mortgages because they’d rather spend the money on cruises as heroes of the working class, striking a well-deserved blow against the banks for the rest of us.Â  I see them as the folks who are doing their best to ruin a very good thing for the rest of us.

The piece is unnecessarily sympathetic to the Administration’s case, but it’s still encouraging to see the Times come out against their union buddies.

Folks, you can start calling me Nostradamus now.Â  From the NYTimes, the U. S. reaps the fruit of Obama’s short-sighted tariffs on Chinese tires:

China said it was investigating whether the U.S. is subsidizing and dumping automotive and chicken meat exports, two days after President Obama put tariffs on Chinese tires.

Global trade wars are bad — they harm everyone involved.Â  We’ve known this for a long time, and we had it proved in no uncertain terms during the Great Depression.Â  And yet here we are having fired the first shot, just like we did with the Smoot-Hawley Tariff act.

Don’t read the New York Times article in too much detail — it takes a pretty protectionist stance towards our trade imbalance with China, while ignoring economic fundamentals.Â  In particular it ignores that 1) trade relations aren’t simply two sided, they are like a triangle or other multi-sided flow diagram; and 2) our trade imbalance with China primarily results from our large deficit (they have to get dollars somehow to buy our t-bills, and the only way they can do that is by selling us stuff).

President Obama, at the behest of the United Steelworkers union, will be adding a 35 percent tariff on tires imported from China.

The basic idea behind trade is that certain countries are better at certain things; international trade allows each country to specialize in what it’s best at.Â  Alternately — and this is what we’re choosing here — you can prop up industries where your nation is non-competitive instead of trying to spread into industries where you have a competitive advantage.

Here’s a great quote from the article:

Senator Sherrod Brown, an Ohio Democrat who had pressed for the tariffs, also praised the decision.

He said in a statement, â€œIf American workers and manufacturers are going to compete in the global market, they need to have a government that uses trade enforcement tools.â€

Allow me to translate:Â  “Because American companies and workers are inherently inferior to foreign companies and foreign workers, they require a crutch from their government.”

Thanks guys!Â  Now not only will my tires cost more, but China will likely impose retaliatory tariffs that target an industry where we do have a competitive advantage.Â  Those guys, of course, don’t deserve protection because they didn’t pay their congressman enough money.