I haven’t bought his book on growing up in West Baltimore yet, but this piece by Ta-Nehisi Coates is quite good.  In it he discusses, among other things, the impact of having two parents who were present:  he draws an analogy of “being dragged across the finish line” while growing up that I think is quite perceptive.

As Karen notes below, Senator Tom Coburn from Oklahoma–who, with James Inhofe, constitute the most extreme Senate delegation from any state–prayed for the incapacitation or death of a Democratic Senator so that health care would be blocked. 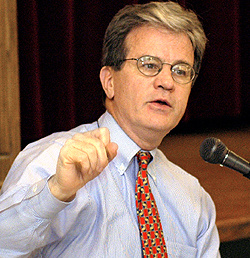 guy must be a really terrible fellow… Except, of course, that’s not what Coburn said.  Here are his actual words:

What the American people ought to pray is that somebody can’t make the vote tonight.

Now you can certainly interpret those words as Klein did, but when you’re a respected journalist you don’t get to simply assume the worst about people and move on.  You’re supposed to provide as accurate and balanced reading of events as possible — even if you’re just blogging.

Klein, of course, is a huge fan of health care “reform.”  One of his favorite provisions is the individual mandate, which he argues will force young, healthy people to buy insurance they wouldn’t otherwise purchase, lowering costs for everyone else.  What he doesn’t mention is a less popular, but economically equivalent way of achieving the same outcome:  instead of forcing young people to purchase something they don’t want, we could just have an “under 30 tax” and distribute the proceeds to the rest of the population.  That way people who are early in their careers and suffering under a mound of student debt could be saddled with yet another financial obligation, for the benefit of those with much higher salaries.  I know the AARP thinks it’s a great idea.

The law says I can walk away from my house, even if I can afford to make payments.  Is is ethical to do so?  I say no:

So no, I don’t see jerks who speculate on houses and then walk away from their mortgages because they’d rather spend the money on cruises as heroes of the working class, striking a well-deserved blow against the banks for the rest of us.  I see them as the folks who are doing their best to ruin a very good thing for the rest of us.

(Are you allowed to do things like “quote of the day” for a site as irregularly updated as mine?)

From the Talking Mirror comes this Word on Internet Commenters:

Turns out, the overwhelming majority of people with internet access are inarticulate, misanthropic pricks with a surplus of time but a deficit of brain activity.