Todayâ€™s New York Times carries a story of graft and corruption among U. S. officers charged with overseeing projects and distributing money in the early days of the Iraq reconstruction. For those who arenâ€™t familiar, the monetary distribution at that time was insane. From fellow government workers Iâ€™ve heard stores of forklift-ready pallets of shrink-wrapped money being loaded into cargo planes. Contractors and locals in Iraq were paid with bundles of $100 bills by folks who would walk around with their pockets bulging with cash. 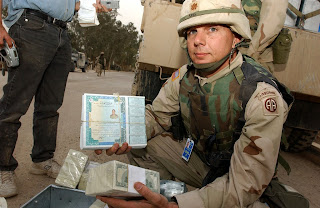 Now we hear that some of the senior officers tasks with distributing these funds may have been on the take. Nobody should be surprised by this. Beyond the â€œin any group youâ€™ll have a few bad applesâ€ argument, itâ€™s easy to see how this could happen. The temptation in any situation involving large amounts of cash is, of course, enormous. However, the real condition that predicates this is that most of the money was probably wasted in the first place â€“ paid out in good faith for supplies or services that were never delivered. I remember a quote from someone from the Inspector Generalâ€™s office, who was responded to a local construction managerâ€™s apologies for the poor condition of a work site. â€œAt least thereâ€™s something here,â€ he responded.

In this situation, itâ€™s easy to see how those distributing the money could be tempted: â€œIf all this money is being flushed down the drain straight into peopleâ€™s pockets, why shouldnâ€™t I get my fair share?â€ Itâ€™s one thing to steal large quantities of money that are going to a worthy cause, but when the money is being wasted anyways itâ€™s much easier to steal.

If the allegations are true, I hope that the two officers in question will be recalled to active duty and court-martialed. Unfortunately, the military is strangely reluctant to enforce discipline in the ranks for non-violent crimes such as these. Court-martialing military members is an expensive process, and itâ€™s often easier to avoid the hassle and let the Department of Justice handle the headache. A good example of this is a former Coast Guard warrant officer who was convicted of dumping oily waste off a Coast Guard cutter into the Honolulu harbor. This is exactly the sort of actions the Coast Guard crucifies civilian mariners for, but in this case the service declined to assert jurisdiction and court-martial the member. Instead, he was handed over to federal authorities and given a slap on the wrist.